Go to: Message List•New Topic•Search
Submitted For Your Approval - Fifty-second Installment
Author: D. B. Arthur
Date: 05-11-2022 - 20:08
In March of 1997 I made an extensive trip to Mexico with my friend Steve Brown and the two of us rode quite a few trains. In 2019 Steve returned to the hamlet of Ventoquipa, Hidalgo (and other places) and photographed what it looks like today without the railroad. A lot of his 1997 photos and my photos look similar as, many times, we were standing alongside each other when we took them.

On the morning of March 07, 1997, Steve Brown and I headed over to Buenavista Station to ride Train 61 (7) for Beristain. We observed a couple of NdeM business cars attached to the train for Veracruz: No. 103, "Morelos," was a venerable heavyweight in immaculate condition and No. 108 was an ex-CALIFORNIA ZEPHYR Budd dome observation car. Of particular interest was the installation of a couple of straight panes of glass into the car's dome housing (a la Pullman-Standard) alongside the curved panes of glass (a la Budd and ACF). Only in Mexico. A railroad official told Steve, in English, not to take pictures of the passengers who were boarding. Another threat to national security? Our train to Beristain was powered by NdeM 9812 (MP15AC) and our Segunda coach, No. 3830, was a real gem --- so ancient it had wood flooring. This is a spectacular line in terms of scenery; desert gives way to forested areas as the train climbs in elevation. Beristain could have passed for some small town in Oregon. What's interesting about this line is what happens at Ventoquipa, a town 34 kilometers short of the end of the branch. There's a basic "hub and spoke" system in effect. A single car "feeder" train serves passengers on two additional branch lines, interfacing with the "mother" train in both directions at Ventoquipa, with passengers making across-the-platform connections. There are not too many places where one can witness such an operation anymore. Steve and I tried to taxi from Beristain to Honey to intercept the "feeder" train on the Honey branch, but due to poor road conditions and tight train scheduling, we were only able to get to Anita and managed to catch the train there. So, now I'm "missing" the 15 kilometers from Honey to Anita! I guess I'll have to go back there again and "close the gap", as we mileage collectors say. We then rode the "feeder" train from Ventoquipa to Apulco (good scenery on the north end with lots of sharp curves) and bused back to Mexico City. 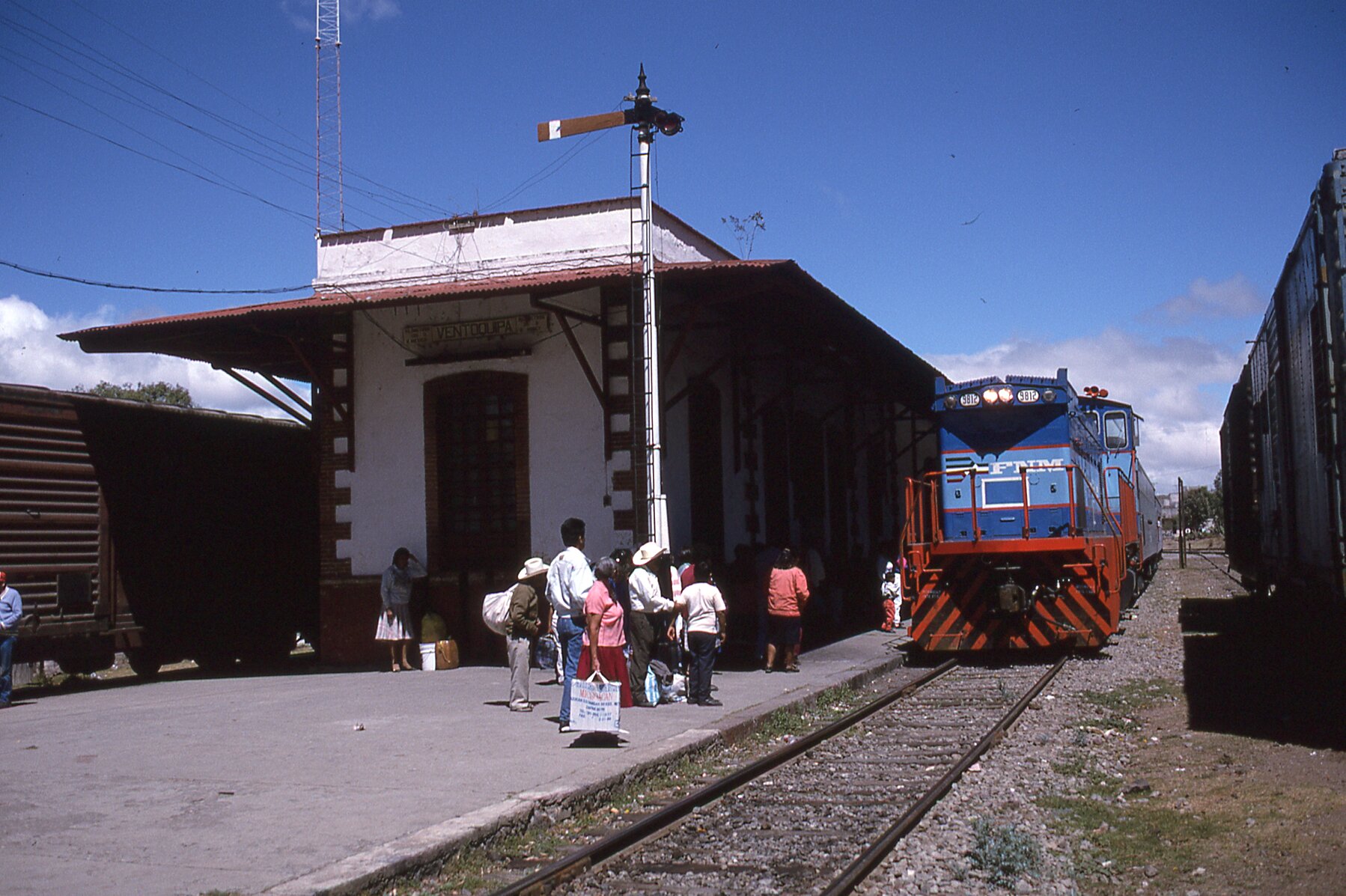 In the photo above, NdeM Train 62 prepares to depart for Mexico City. Ventoquipa had four arrivals and four departures daily, with the "mother" train to and from Mexico City and the "feeder" train serving the branches to Honey and Apulco. There was so much patronage that it was able to support a vendor's taco stand on the station platform. Now, it's all gone.

This is what the place looked like on November 19, 2019 when Steve paid a return visit: