Go to: Message List•New Topic•Search
Submitted For Your Approval - Fifty-sixth Installment
Author: D. B. Arthur
Date: 05-19-2022 - 17:04
In August of 1979 I made a trip up to British Columbia and Alberta to chase and photograph trains. I was joined by my good friend Ron Davis, a Canadian who grew up in southern California but made frequent visits to Canada. Ron managed to befriend a Mr. W. S. Paffard, who happened to be the Assistant Superintendent in Revelstoke for the CPR. Mr. Paffard was gracious enough to type up some letters of introduction for Ron and myself (I still have mine packed away somewhere) and these magical pieces of paper, when presented to train and engine crews, allowed us to have cab or caboose rides basically anywhere in the territory he governed. We "exercised the option" for either cab or caboose rides on "The Canadian" from Field to Lake Louise, a local that served the Ossoyoos Subdivision from Penticton to Okanagan Falls (now abandoned); a local freight that served the Princeton Subdivision from Spences Bridge to Penticton (now abandoned) with the business car "Van Horne" attached to the rear; and a smattering of general merchandise and coal trains from Golden to Spences Bridge.

With the help of the late Lymon S. "Mo" Morrison, a railfan who also happened to be the agent at Penticton, we were tipped off about being in the right place at the right time (Spences Bridge) when the business car "Van Horne" moved from Vancouver to Penticton on an irregular business trip intended to wine and dine shippers. The CPR officials flew to Penticton for the meeting and the car deadheaded to that city. "Mo", the late Dave Wilkie of Vancouver Island and Ron and myself got to ride the car, along with the chef, from Spences Bridge to Penticton. The chef made us a delicious pot roast dinner en route! In my many travels, this was something where I practically had to pinch myself to be assured I wasn't dreaming! The Princeton Subdivision is now 177.8 miles of recreational trail.

Here's a slide of our train, when we were stopped briefly at the station in Merritt. This whole area was hit hard by massive flooding in November of 2021 and much of the abandoned CPR right-of-way that had been turned into a recreational trail was wiped out along with the adjacent provincial Highway 8.

In my seventh installment posted on March 10, 2022 at 01:21, there is another photo of this train. I believe that photo was taken near the Jura loops east of Princeton.

This adventure in B.C. and Alberta in 1979 was one I will never forget. 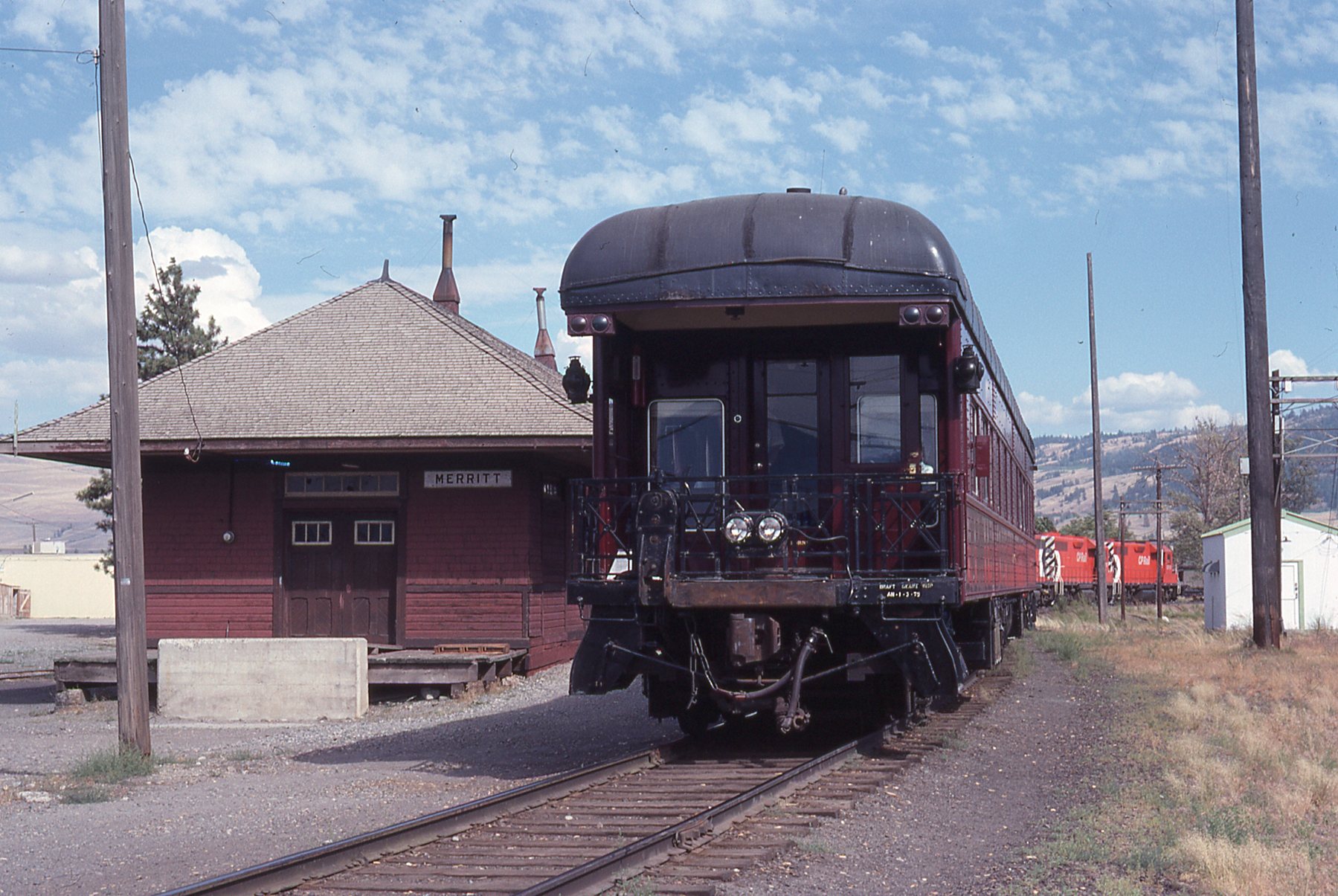